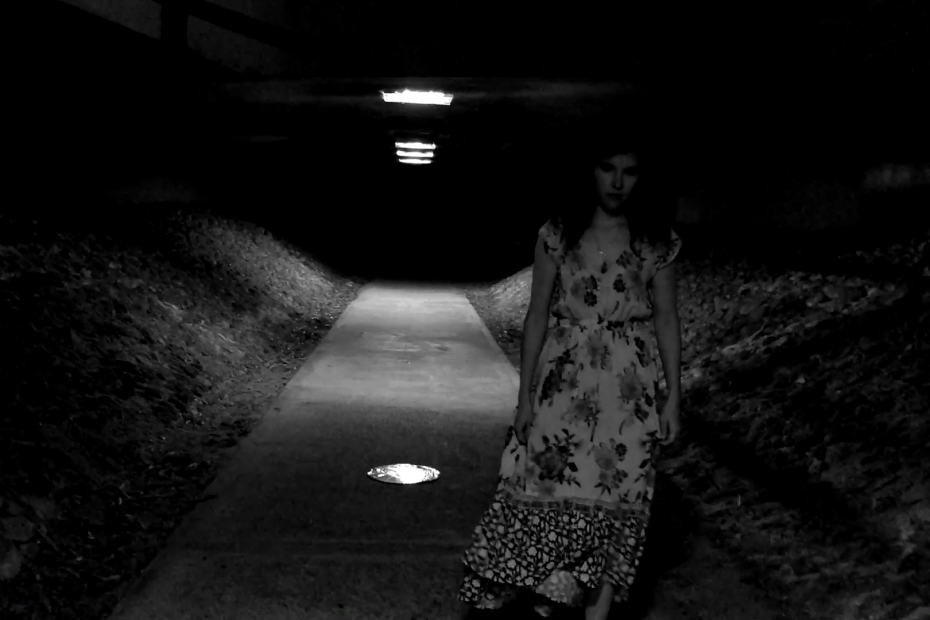 Still from “Hook and Eye”, collaboration with @cianholt , 5:10 minutes part of the “Zan, Zendegi, Azadi” (Woman, Life, Freedom) exhibition currrently on at @ladderartspace This video work follows three women as they purposefully walk through a dark, deserted urban landscape to explore ideas of women, freedom and night. The footage used to create this video was filmed collaboratively by Carolina Arsenii and @cianholt and involved hours of traipsing through the coastal northern suburban streets of Perth. Only a fraction of the footage filmed was used. The creation of this video required us to visit sites that may be traditionally considered dangerous for women such as suburban streets, underpasses and parkland in the dark of the night. We felt we were only able to be out in the night with the safety of each other’s company, but the video depicts an ideal world where women walk at night alone without feeling unsafe. In some ways, by the making of the video, we were taking a step towards creating this reality.… Read More »Currently Exhibiting – Hook and Eye 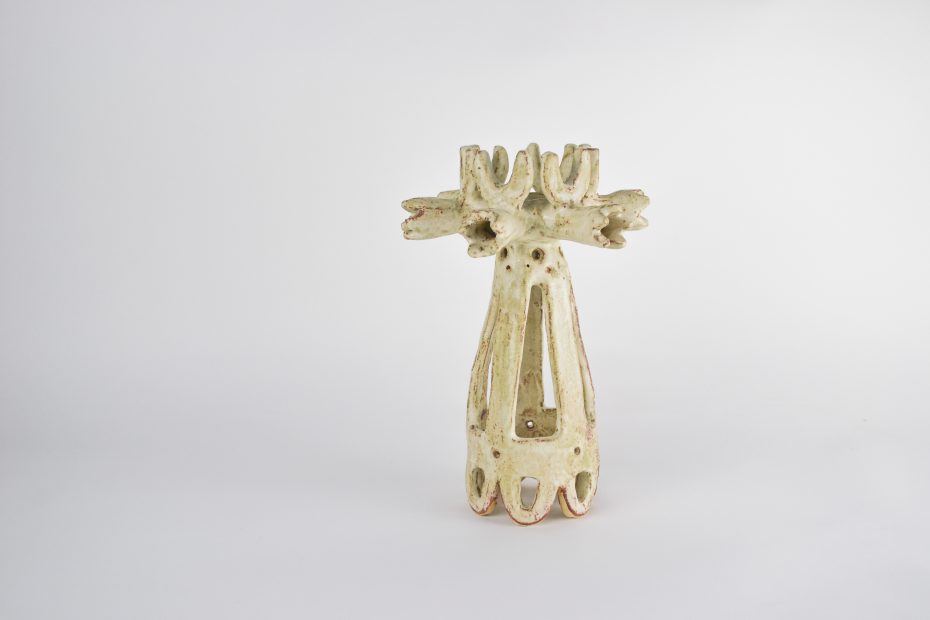 A hollow structure crowned with abstract, gargoyle-like forms, this work explores ideas surrounding the intersection of the practical and the spiritual. The sandy finish of the work mimics an ossified creature or a tool from previous generations, yet the gargoyle-like forms suggest a surreal spiritual device. Gargoyles traditionally play a dual role, that of caretaker, providing the practical function of clearing water from a building and that of spiritual warden, protecting a building and its inhabitants from evil spirits. The intriguing physical form of the gargoyle is an additional and unintentional by-product that does not address either function. The piece confronts the idea that a by-product that does not address an intended function can be a compelling characteristic of a functional object. This piece interrogates whether an object needs to be justified by a practical or spiritual function or whether it needs to be justified at all. 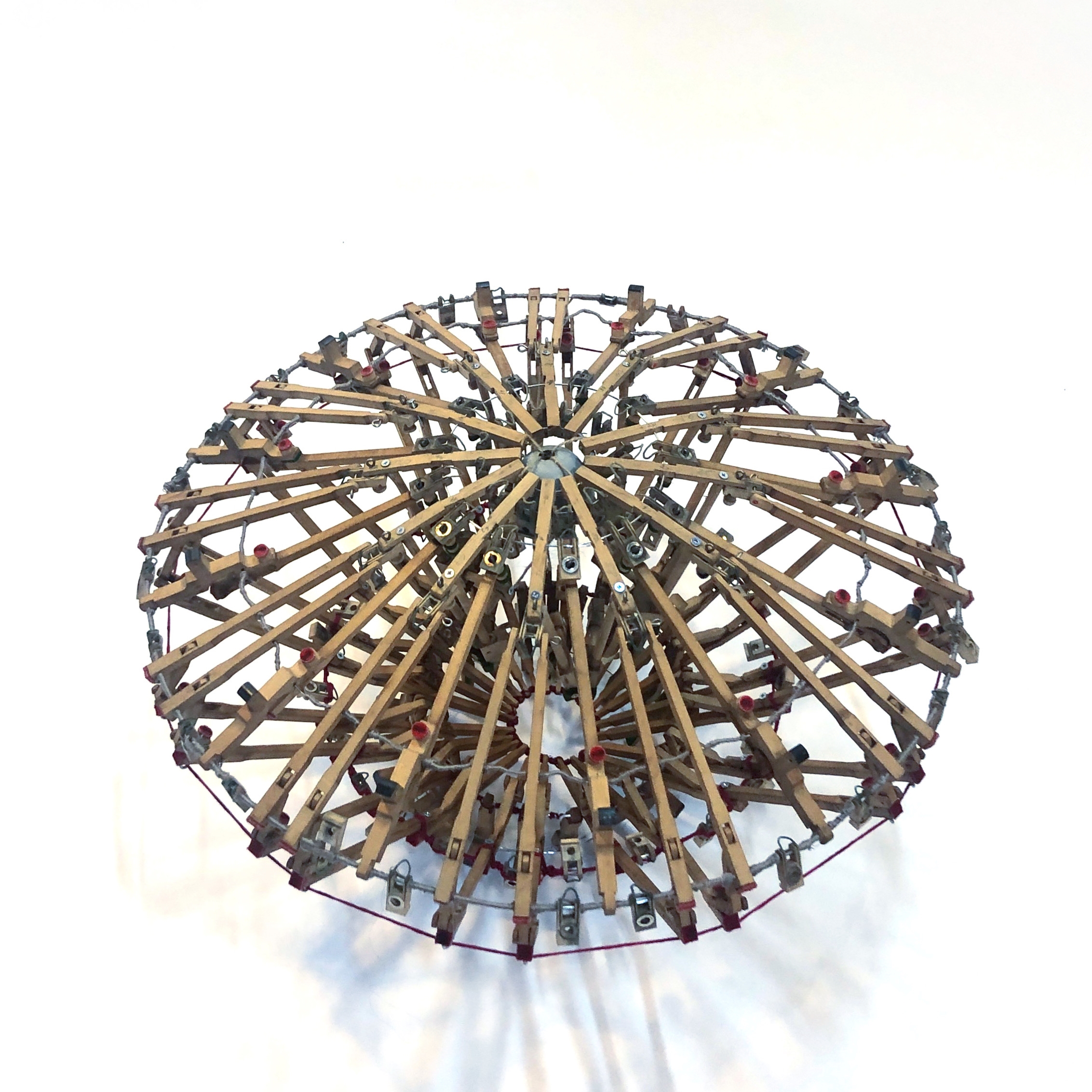 Conulariid 55 x 35 cm, reclaimed piano parts from defunct pianos, currently on show at the Reimagine Art Prize at Wallarobba Arts and Cultural Centre in Hornsby, NSW This work is now on show as part of the Reimagine Art Prize in Hornsby, NSW Made using defunct piano parts, this work reuses and repurpose waste, to explore the mystery of trying to reconstruct the past through surviving relics. Conulariids are a little-understood fossil group, thought to be related to Jellyfish.  Conulariids are now extinct, and all that scientists have to try to understand how these animals lived is their fossils. This work is an imagined form, inspired by the idea of Conulariids. The use of defunct pianos as the primary material for this work was an attempt to incorporate more recycled and repurposed resources in my work. For an earlier “Conulariid” shown in Sculpture by the Sea (Sculptures Inside) I used a piano action found in the verge. Thanks to Pianos Recycled for donating the piano actions for this Conulariid.

You are warmly invited to attend Nets and Traps, rescheduled for the third time due to the pandemic, this show is now most certainly on, opening on 4 May 2022 with the opening event on 6 May 2022 at 6pm!

Thanks for all who came to “Poster Walk” A self guided tour of the Poster Walk can still be taken over the weekend. https://www.eventbrite.com/e/poster-walk-expedition-to-the-bermuda-triangle-tickets-225203488697?utm_source=eventbrite&utm_medium=email&utm_campaign=post_publish&utm_content=shortLinkNewEmail

Invitation to Exhibition and Artist’s Talk 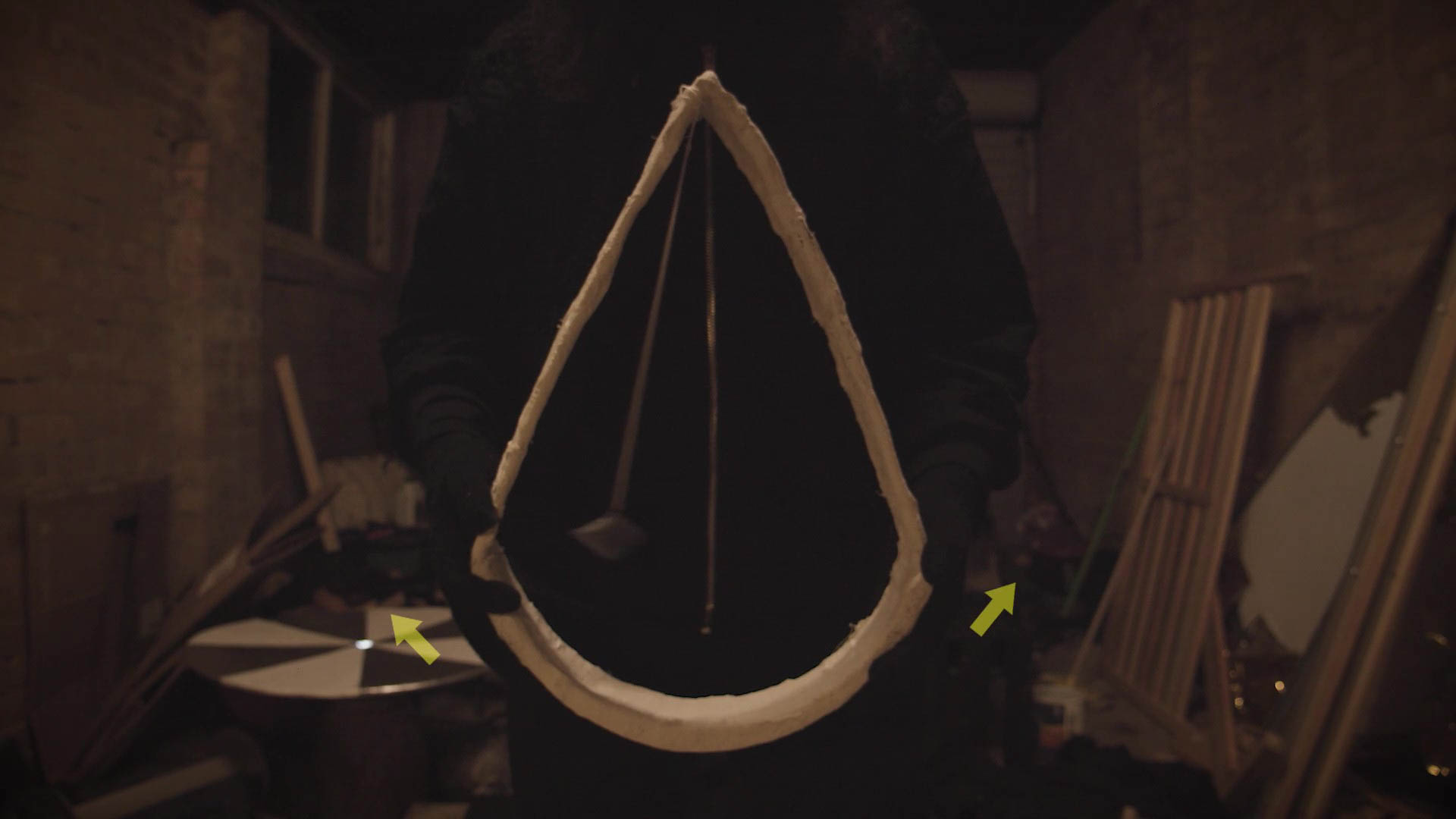 AN INSTRUCTION MANUAL ON HOW TO BE LUCKY

Thank you to the City of Melbourne for funding me with a Covid 19 Quick Response Grant. In amongst the delirium of isolation I have been busy creating a video which will premiere online with an accompanying artists talk in mind-June. Please stay posted as anyone in the world will be able to attend this online event.

I warmly welcome you to my upcoming exhibition

Below is a short film I made on the sheer terror of existence. Make sure you turn up the volume.

Below are some photos from the Raku-firing process, which is a technique of placing glazed ceramics in a kiln for a relatively short period (approximately 1.5 hours) and then throwing them mercilessly into sawdust, which creates interesting patterns and textures.

I am taking great delight in my ceramics course and creating some 3-dimensional archetypes with clay. The “Good Omen” heralds the birth of a new artistic direction and the coming of Easter. The above images show porcelain ceramics which are drying prior to the initial bisque firing (1000 degrees) after which they will be glazed and then again fired to stoneware quality (1360 degrees). The archetypal individuals have been placed in archetypal arrangements: “the archetypal philosophy circle” and “the archetypal power struggle”.

Exciting things ahead this semester, including Lithography and Ceramics